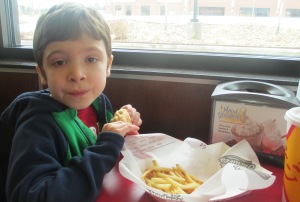 Today was a typical snow day in the South. Lots of hype and most everything shut down ahead of time, only to wake up to find half an inch of snow and wet streets! Despite being disappointed that the sledding wasn’t going to be good, most kids were happy just to have a day off from school!

Not Ryan! Snow has no meaning to him. We learned long ago that Ryan doesn’t find exciting what most kids do. Ryan would have been a lot more happy going to school this morning. Ryan loves school. I’m not sure why. He can give his teachers a hard time about doing his work. And yet, he wakes up in the early morning with a smile on his face. He’s dressed and ready for the bus in no time. I’m so thankful that school does not have to be added to his long list of battles. I have to give credit to his teachers and the school. I know we’re extremely lucky to have a public school and teachers who understand Ryan and what makes him tick.

So, Ryan would have been a lot happier going to school today. But I decided that we had time on our hands and today would be a great day to work on our “eating out” goal. Again, most kids look at going to a fast food restaurant as a treat. Not Ryan. “I want to eat at home,” Ryan said when I told him we were going to Hardees for lunch. “We need to practice eating out,” I said. “We are going on vacation this spring and summer and we’ll be eating out a lot. You can do it. Let’s go! It will be fun.”

Ryan wasn’t convinced that it would be fun. But he got in the car. He gave me his little “pouty” face. He continued to pout all the way into the restaurant, while I ordered, and to his seat. But then something magical happened. When our food arrived, Ryan began to eat. And one more very important thing. Ryan did not have his hands on his ears. This was progress. The last time we ate at Hardees, Ryan did not eat at all and sat with his hands on his ears, staring down at the table, his body stiff, the whole time.

Kids like Ryan who are very sensitive to loud sounds and bright lights often keep their hands on their ears even if there is no loud noise. It’s a way of keeping themselves safe “just in case.” It’s interesting that Ryan can tolerate Chik-fil-a. It’s the only restaurant where he will eat and is somewhat comfortable. But there isn’t a Chik-fil-a in every city. Ryan will need to learn to tolerate many different types of restaurants. So, I considered today a success, even if he only ate his fries and not his  hamburger.

I made the experience short and positive. He got lots of high fives. He came home with a smile on his face. I wonder if Ryan will ever be excited about getting to eat out? That would be real progress. But for now, we’ll just focus on what gets him excited now, like getting to see a train go by at a crossing, or counting 25 security signs while traveling through the neighborhood, or seeing a car that looks just like “Mommy’s” car.  Or even getting to work with his ABA (Applied Behavior Analysis) therapist on a snow day. She was able to make it after all. The streets were clear.  “Do you want to play first or do work first?” his therapist asked when she first arrived.” Ryan said “Work first.” Go figure!

I'm a wife, mother, teacher, writer, and advocate of autism. I have a 7 year old son on the high functioning end of the autism spectrum. I love writing about the world of autism and our families' daily adventures as we navigate through both stormy and calm waters. Writing this blog is truly therapeutic for me. I hope other families dealing with autism will read this blog and discover that they are not alone.

Follow Shooting for the Moon with Ryan on WordPress.com

I'm a wife, mother, teacher, writer, and advocate of autism. I have a 7 year old son on the high functioning end of the autism spectrum. I love writing about the world of autism and our families' daily adventures as we navigate through both stormy and calm waters. Writing this blog is truly therapeutic for me. I hope other families dealing with autism will read this blog and discover that they are not alone.

Strength and honor are her clothing; She shall rejoice in time to come. Proverbs‬ ‭31‬:‭25‬

Mothering a preemie, a princess, and a work-in-progress

Tales of a formally informal tribe.

Quips From a Mama's Eyes...

Life Is In The Details

Life is in the details of the every day. It's all the little things that add up to be monumental.

The Person Next to You

The Art and Craft of Blogging

The latest news on WordPress.com and the WordPress community.